Today is my thirty-ninth birthday and what better way to celebrate than sharing thirty-nine things I’ve learned over the years:

This post is inspired by the birthday lists Noah Stokes used to make.

I love to do things outside and try to get the family out every weekend. Today was no different and we decided to hit a new trail that is nearby called the “South Fork Trail” which is located in McAdenville, NC and runs beside the South Fork River. It’s managed by the Carolina Thread Trails which is specific to North and South Carolina but has a great mission:

The Thread Trail arose from a discovery process started in 2005 when the Foundation For The Carolinas convened more than 40 regional leaders and organizations to determine the region’s most pressing environmental needs and concerns. From that process, open space preservation surfaced as the number one priority. The Carolina Thread Trail was successfully launched in 2007 as a project focused on preserving natural corridors and connecting people to nature through a network of connected trails.

The South Fork trail is only two miles going out and back and the path is wide with almost no elevation climb, so it’s perfect for those that just want to get outside and do some walking, but I’m most interested in the historical information about it:

This is a historic trail that was originally used by the Native Americans and then utilized by settlers for textile mills. There were two mills in the woods along the trail. One was the Ferguson Mill and the other one was nicknamed Pinhook. Opened in August 1852, the Pinhook Mill was the second mill to operate along the South Fork River. According to Gaston County historian Robert Ragan, the mill received its name because mill workers’ would use bent textile pins to fish for lunch outside the building’s windows. During the Civil War, a small detachment of Union soldiers were sent to burn down Pinhook Mill, which was producing cloth for the Confederacy. Upon hearing the soldiers coming, mill superintendent William Sahms ran out to meet the Union troop, only to find them led by his Pennsylvanian childhood neighbor. Sahms convinced the soldiers to spare the mill and the soldiers burnt the bridge instead.The stone pillars of the bridge are still in the river.

Here are a few photos from today’s hike. It’s worth checking out if you are in the Charlotte NC area. 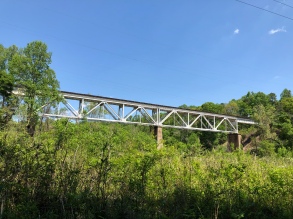 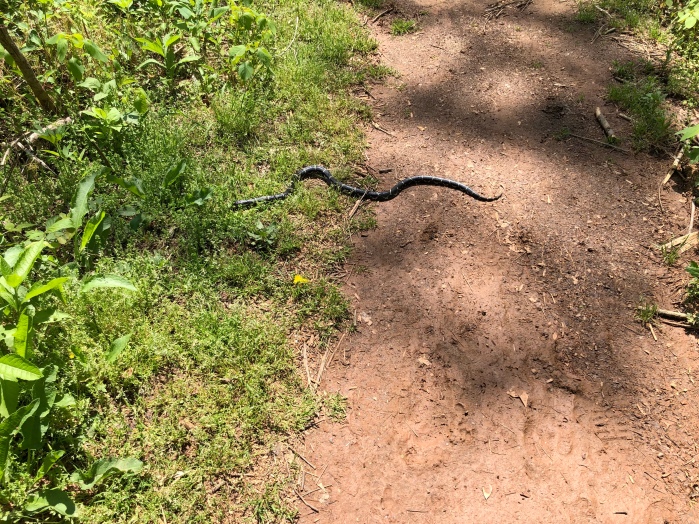 Just be warned you do need the Operator Mono font first and it does cost around $200:

Personally I’ve not been a huge fan of ligatures and my main reason for liking Operator Mono is the italics, but I know many like them and they do look pretty neat in this VS Code screenshot:

If you want to try it visit the Github repo and install the Python utility to create the new font.

With the Apple Watch, I was struggling to close my rings especially the standing. It seemed like nothing I did would cause it to close in those last 10 minutes after the warning came. So like all modern people, I went to Twitter to share my frustration.

Ben Sampson replied with a few tips that have been tremendously helpful to me:

Exercise = minutes when heart rate is over 100

By having your arm just hanging down it’s made closing that ring way more consistent.

The Revenge of Analog by David Sax is a book I picked up for two reasons, I thought the cover was awesome, and I’ve been on an analog kick this year. I’ve switched to real books, using pen and paper, and even subscribing to magazines instead of reading online. So I thought this book would be right up my alley.

The book is broken down into two parts, the Revenge of analog things and the revenge of analog ideas. Inside the first part talks about vinyl records, paper (moleskin), Film, and board games. Then part two switch to print, retail, work, and school.

I was disappointed in this book because it felt like a history lesson and then just information about companies inside the industry. For example, the revenge of paper chapter was almost entirely about Moleskine. However, I did enjoy the introduction and the epilogue that had a story and interviews with kids at a camp that doesn’t allow electronics.

Overall I give this book two out of five stars, and it just didn’t relate to me the way I thought it would.

The Washington Post has a story on how merchants are using Facebook to flood Amazon with fake reviews and this reminded me of the three-star review rule to save time and hassle.

It works like this. Find a product you are interested in buying, scroll down to the customer reviews and select three stars to filter the view so it only shows those reviews.

The advantage of this method is it removes all the paid reviews, removes the people that are always overly positive, and gives you a much smaller number to read through. Here is an example of the first product I found while writing this post: 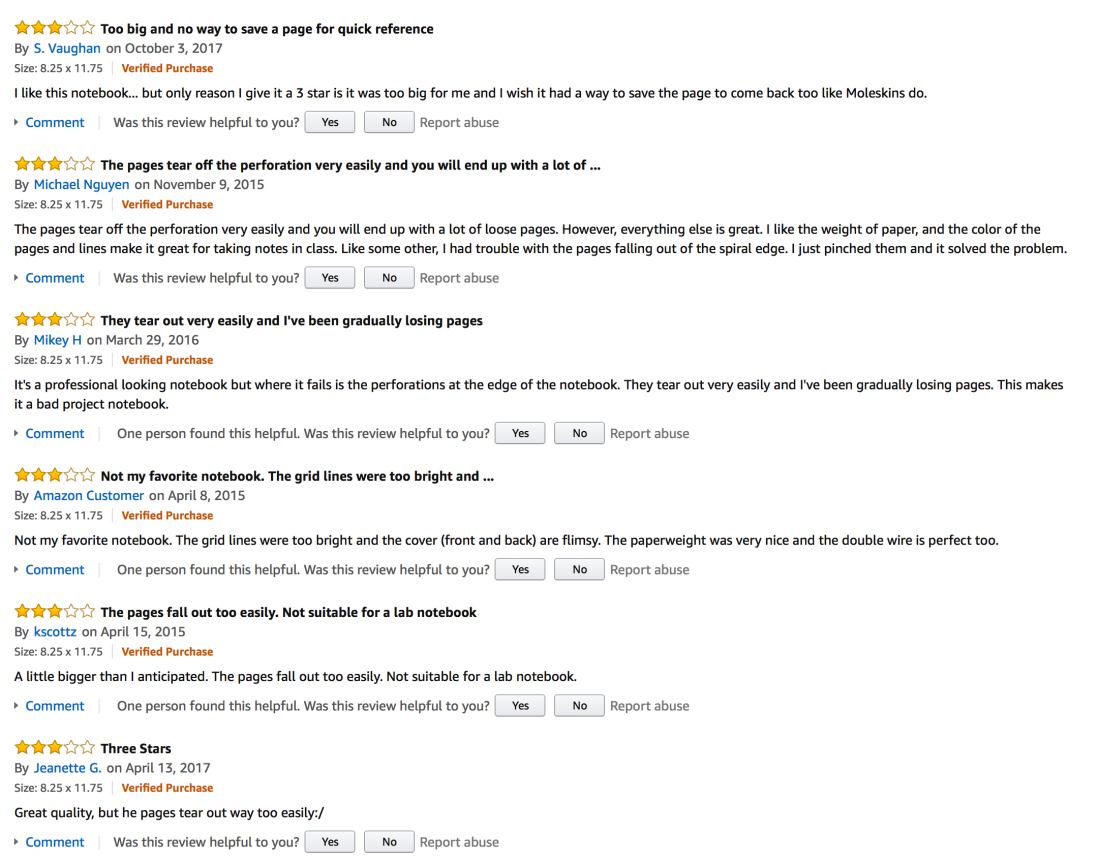 Just by spending a few minutes going through the list it’s pretty easy to see two important things. The paper is apparently really good, but the perforation is bad. If tearing out pages is something important to me then I know this notebook would be one to get. On the other hand, if I want to keep all the pages together and keep my notebook for many years, I should probably keep looking.

The next time you are buying something on Amazon give this method a try!

I did not come up with this method and found it on someone’s blog a few years ago and I can’t seem to find the source from a quick web search. If and when I find it I’ll credit them, and if you know who first coined this idea let me know in the comments.

PayPal Holdings Inc. insists she should have known the minimum age is 18, because the rule is clearly stated in terms and conditions she agreed to. Clearly stated, that is, in a document longer than The Great Gatsby—almost 50,000 words spread across 21 separate web pages.